Are you looking for some cheap flights from Denver to Seattle?  We think we can help – the airlines have launched a spring sale dropping nonstop fares  to Denver to Seattle almost very day from April  22 to May 17 departures for just $145 RT.   Here is an April 28-May 7 – Just $147 on United.   We love Seattle and here are some of our favorite top attractions.

Pike Place Market is a public market overlooking the Elliott Bay waterfront in Seattle, Washington, United States. The Market opened August 17, 1907, and is one of the oldest continuously operated public farmers’ markets in the United States. It’s a year-round farmers market and a visual riot of vegetable, seafood, cheese and flower stalls along with handicrafts and tourist-friendly knickknacks. And, of course, the flying fish. Vendors at Pike Place Fish Market gleefully toss salmon to each other and crack jokes, always drawing a crowd at the fish stall by the market’s main entrance.    For less of a crowd, take the stairs to “Down Under,” a wood-floored maze of small shops beneath the main-level market. And mosey into the shops and stalls across the street from the main market, including what is touted as “the original” Starbucks (which actually moved here from down the street about five years after its 1971 opening, but retains its vintage look).

Also look at May 24th and May 31 departures 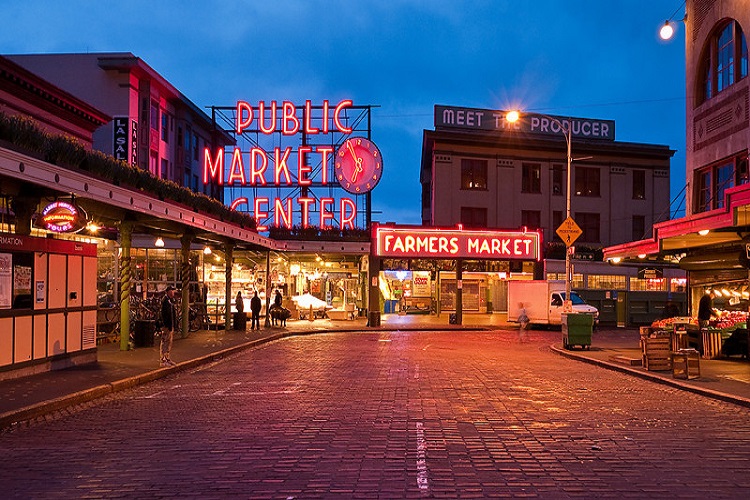 Info: The main entrance to Pike Place Market is at First Avenue and Pike Street. The market is open daily. pikeplacemarket.org

If you see one thing in Seattle, see everything. From 520’ the Observation Deck provides a 360° view of Seattle and beyond that commands your attention. See the snow-capped Cascade Mountains to the east and the majestic Olympic mountain range to the west with breathtaking indoor and outdoor viewing. Plus, use the Space Needle’s award-winning interactive technology to explore the icon’s history and Seattle’s sights like never before.   All guests receive complimentary digital photo downloads and access to powerful free telescopes. Take your experience to new heights and unlock Seattle’s secrets with the free Space Needle app!   It’s 605 feet tall and looks like a spaceship on stilts, towering over Seattle Center (seattlecenter.com), a cultural complex where you could easily spend hours at the Pacific Science Center, Chihuly glass display, food court, theatres or simply watching kids frolic in a giant outdoor fountain.    Get there on the Seattle Center Monorail (another nicely kitschy World’s Fair legacy, seattlemonorail.com) from Westlake Center in the heart of downtown; it takes just a few minutes. 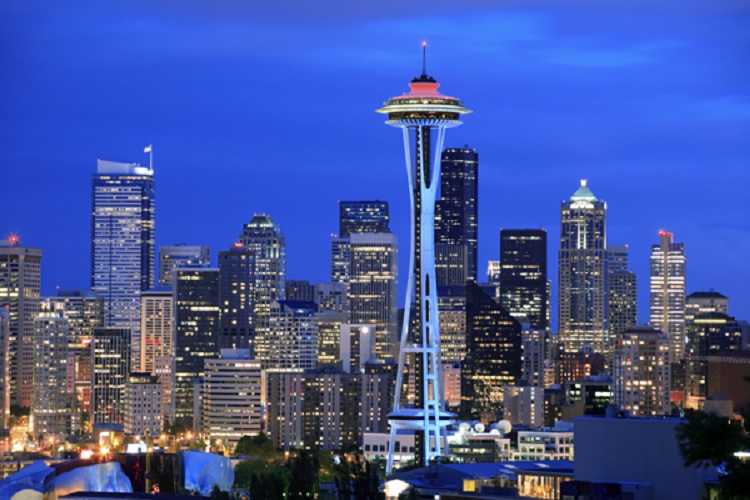 Info: The Space Needle is open daily, including evenings. Admission starts at $19 (adult) for the elevator ride to the observation deck, 520 feet up. Or get a meal with a view at Skycity Restaurant. spaceneedle.com or 206-905-2200.

Info: The sculpture garden is open year-round from a half-hour before sunrise to a half-hour after sunset. Free. seattleartmuseum.org/visit/osp or 206-654-3100.

Ferries shuttle all around Puget Sound and they’re a key, and the prettiest, part of Washington’s transportation system. You can have a fun, quick and cheap sightseeing boat ride as a walk-on passenger (adult fare is $7.70 round trip) on the Seattle-Bainbridge Island ferry. If it’s clear, you’ll even see 14,410-foot Mount Rainier looming to the south on the 35-minute ride. “The Mountain,” as locals call it, really does exist, although it’s often shrouded in clouds.    Board the ferry at Pier 52 on the downtown Seattle waterfront, get off at Bainbridge and walk into the friendly little town of Winslow — its restaurants, cafes and shops are a 10-minute walk from the ferry landing on the main drag of Winslow Way. Back on the ferry, enjoy the spectacular urban skyline view as you approach downtown Seattle.

This museum doesn’t have the most enticing name (although it’s known locally as MOHAI, which at least is shorter). But don’t miss it. MOHAI reopened in late 2012, with new galleries and multimedia displays, in a new location in Lake Union Park at the north edge of downtown. Its exhibits on life in Seattle and Puget Sound cover everything from the maritime past to cutting-edge culture. (Adult admission is $14.) Outside in the waterfront park, at the south end of Lake Union, watch boats scud across the lake (or across the park’s model-boat pond) and float planes take off.  While there, boat-lovers shouldn’t miss the nearby Center for Wooden Boats, with displays, more than 100 historic boats, a wharf, rental boats and free vintage-boat rides on Sundays (first-come, first served). No admission charge.

Soon the traffic-roaring Alaskan Way Viaduct, which cuts off downtown Seattle from its waterfront, will come tumbling down and be replaced by a tunnel. For now, there’s a broad sidewalk along the harborfront with shops, eateries (fish and chips is always a favorite) and wooden piers jutting out into the bay. Stop at the Seattle Aquarium to see what lives in (and beyond) the local waters (adult admission, $19.95). Ride the Seattle Great Wheel, a 175-foot tall Ferris wheel with enclosed gondola-type cabins, for a view from on high of the city, Elliott Bay and the Olympic Mountains to the west (adult ticket $13).

The perfect place for a rainy day — or any day — if you’d like to see everything from European masters’ paintings and ancient Asian artwork to Native American carvings and contemporary sculpture. The museum is in the heart of downtown; its gift store and restaurant offer unusual souvenirs and good food. Museum admission is $17 (adult), with free admission on the first Thursday of each month. (Tie it in with the free First Thursday Art Walk each month of art galleries in the nearby historic Pioneer Square district.)

Seattle’s Chinatown is almost as old as the city, emerging in the 1880s. Now also called the International District, it’s been a cultural hub for Chinese, Japanese, Vietnamese, Filipino and other immigrants. It’s packed with Asian restaurants and shops, and home to the Wing Luke Museum that chronicles the life and times of Pacific and Asian Americans in the area ($12.95 adult admission). Join the locals at bubble-tea shops or for dim sum. Get a big taste of local cultures at Uwajimaya, a bustling supermarket of Asian foods and gifts.

See the essence of the Pacific Northwest at the Ballard Locks, where you can watch salmon and boats — from fishing boats and tugs to kayaks and yachts. The locks carry boats up and down, letting them travel between Puget Sound and Seattle’s freshwater waterways (about 20 feet above sea level). A fish ladder lets salmon swim up past the locks to their freshwater spawning grounds; glass viewing windows let people watch them.

Stroll in the ornamental gardens surrounding the locks (formally known as Hiram M. Chittenden Locks, but called Ballard Locks after the local neighborhood); and listen to outdoor concerts at 2 p.m. on summer weekends, June 1 to Labor Day. No admission; concerts also free.

See Boeing‘s “Future of Flight” exhibits (and design your own jet digitally) and see jets being made inside the Boeing factory, about 25 miles north of Seattle in Everett. The Boeing plant is the biggest building by volume in the world — 472,000,000 cubic feet — and holds the production lines for various Boeing jets, including the 787 Dreamliner. Adult admission for the exhibits and 90-minute guided tour is $18. (Children must be at least four feet tall to join the tour.)

Kristin Jackson: kjackson@seattletimes.com; on Twitter: @NWTravelers. Kristin Jackson is the travel editor for The Seattle Times.